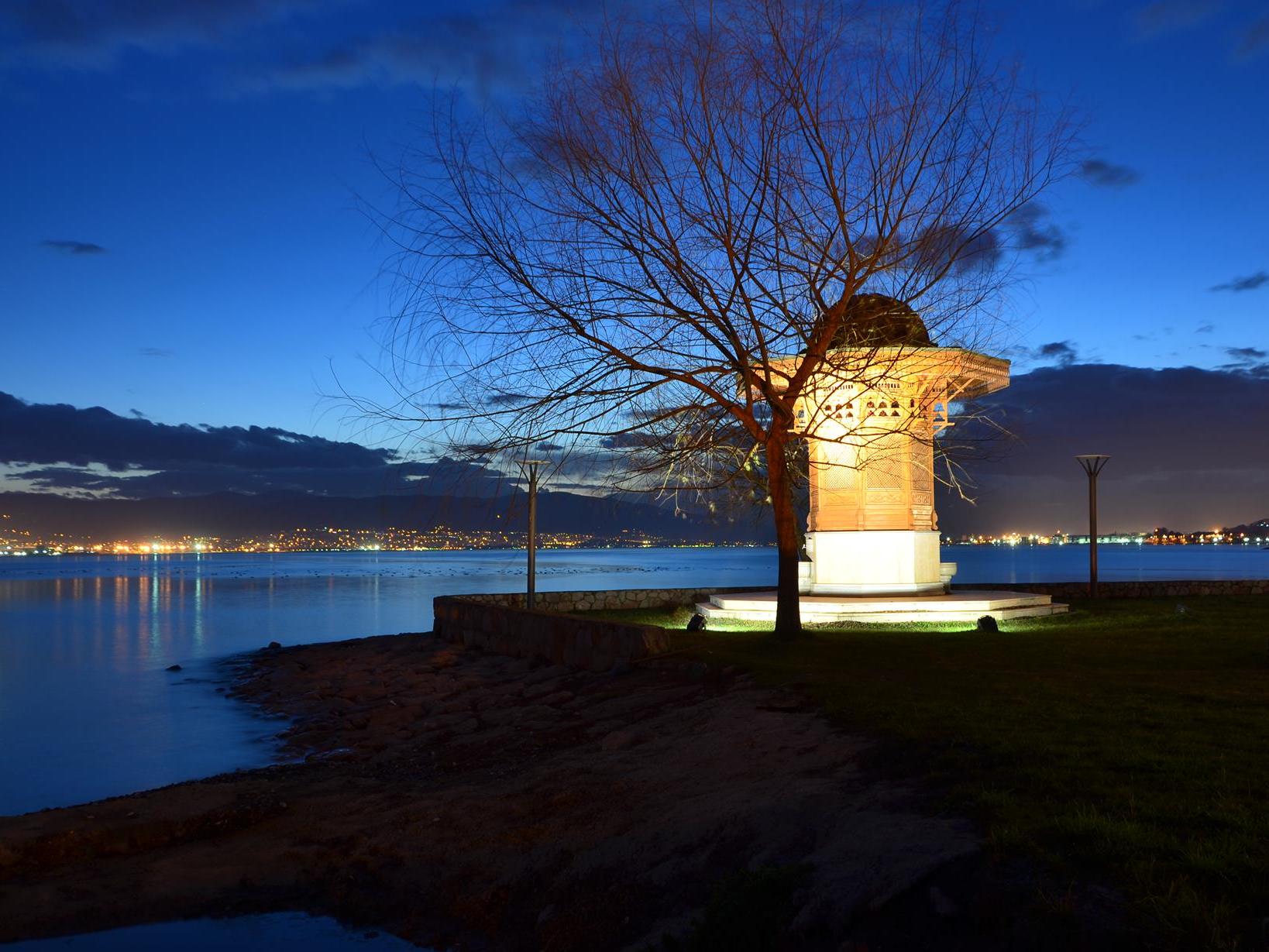 İzmit is a big and a heavily industrialized city in Marmara Region, Turkey, located east of Istanbul, at the very end of the sword-like Gulf of İzmit, the long indentation of the Sea of Marmara towards the east. İzmit is a district of and the capital of the Kocaeli Province.

Not to be confused with Izmir, spelled as İzmir in Turkish, which is the third largest city in Turkey. It is on the shore of Aegean Sea..

Nicomedes I of Bithynia, the ancient kingdom that encompassed the lands east of the Sea of Marmara, founded his capital across from the site of the Greek colony of Astakos ("lobster", modern Başiskele, a suburb to the south) in 264 BC, naming it after himself, Nicomedia. Under the "Tetrarchy" ("four rulers") system between 293 and 313 CE, Nicomedia became the eastern (and the most senior) capital of the Roman Empire. It kept this status until Constantine the Great moved the imperial capital to nearby Byzantium (renamed to Constantinople, modern Istanbul) in 330. The Ottomans took the city in 1337, calling it at first İznikmid, a variation of its original name, and eventually shortening this to İzmit.

İzmit's climate, in short, is oceanic with a touch of Mediterranean. It features very warm, showery summers, and chilly, very rainy and occasionally snowy winters. Morning fog is an almost constant sight year-round.

Summer days are very warm with high temperatures peaking around 28°C in August, while summer nights are relatively chilly, at least compared to Istanbul. Rain during this time is occasional and brief, but also heavy, sometimes bringing strong thunderstorms to the region.

Spring and fall are mild and an ideal time to visit, more so in the warmer parts of both seasons, as night-time temperatures can dip below 0°C as early as November and as late as May. It's also important to keep in mind that both spring and fall is rainier than summer, with about 10 days of rain a month.

Winter is -as Istanbul's 4-month long slushy mess would also indicate- not the best time to go, to say the least. Expect 15-20 days of rain a month, including the possibility of a few days of snow. If it's a sunny day out, expect a much colder (down to -10°C on colder periods) night than Istanbul, even if it's milder during the day.

Several daily regional expresses connect İzmit with nearby Istanbul. The average price is about 5.50 TL/person. You can also book and buy a seat for long distance trains that leave Istanbul’s Asian station for other (Asian) destinations. The cheapest ticket for such a train is 3.75 TL/person, the rate for Doğu Express. The journey takes about 2 hours between Istanbul and İzmit by rail.

Both highways numbered D100 and O-4/E80 (toll-way) which connect Istanbul and Ankara, two biggest cities of Turkey, pass through or by the city. A drive from Istanbul should take no more than one hour, especially on the O-4/E80 which is of a better quality and avoids towns which D100 traverses all the way along.

The easiest way to arrive to Izmit is probably by coach. Private coach (bus) companies schedule regular journeys from Istanbul's two major bus terminals (Harem Otogar on the Asian side, and Esenler Otogar on the European side). Efe Tur and Izmit Tur (the two main coach companies operating in Izmit) run buses daily every 15–20 minutes from both bus terminals starting at 07:00 until 22:00. The fare is 10 TL from the Harem bus terminal, or 12 TL from the Esenler bus terminal.

Efe Tur and Izmit Tur will generally drop off passengers arriving from Istanbul in Izmit's city center, rather than Izmit's main bus terminal.

It is also possible to travel to or from any major city in Turkey from Izmit's main bus terminal.