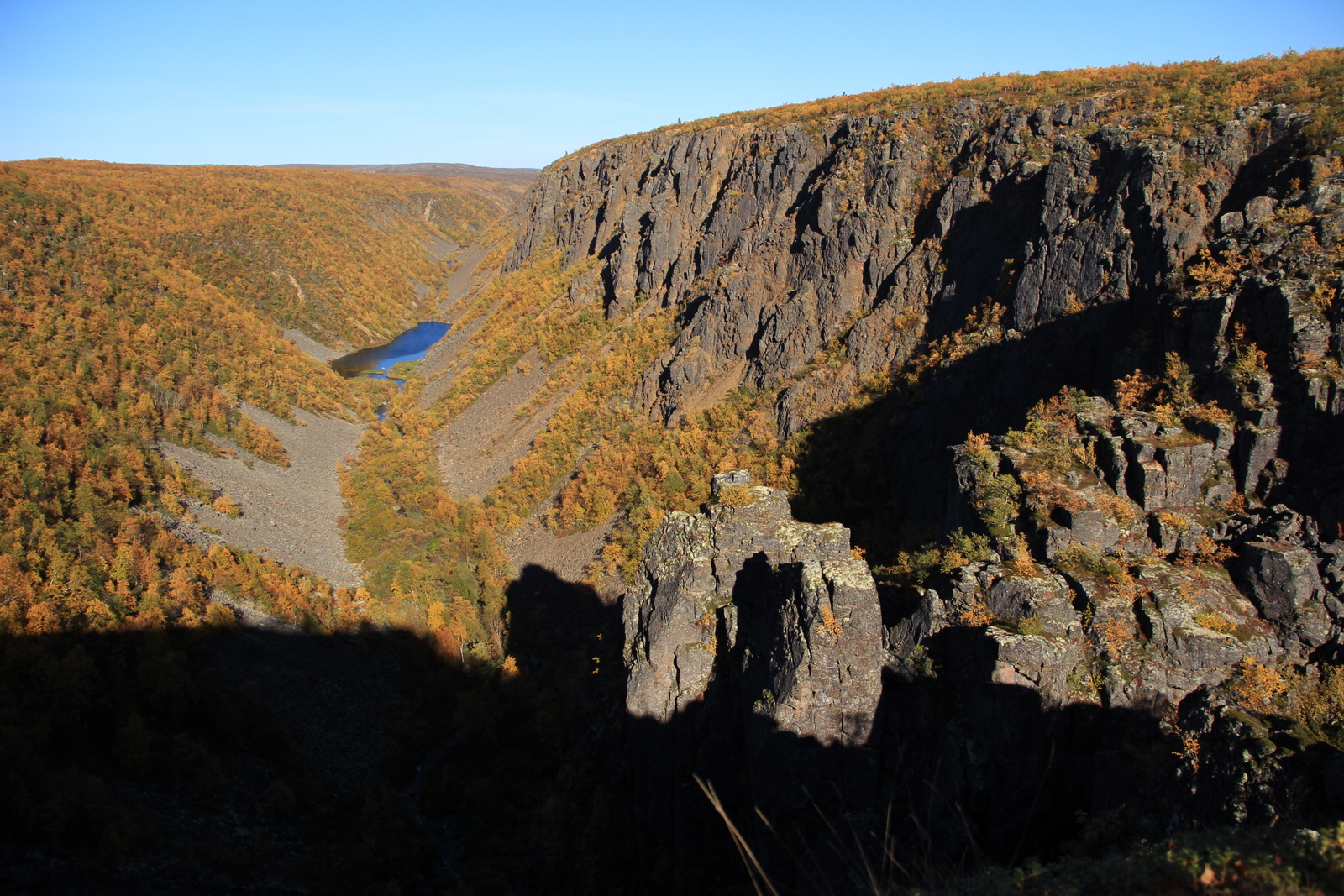 Kevo Strict Nature Reserve (Finnish: Kevon luonnonpuisto, Northern Sámi: Geavu luonddumeahcci) in the municipality of Utsjoki, in the "head" of Finland, is famous for its vast gorge valley. In addition it is home for some very rare birds and plants.

There are two marked trails through the reserve, with limited services. There are no roads, no electricity, and mostly no mobile phone signal.

Kevo Strict Nature Reserve is almost completely surrounded by Paistunturit Wilderness Area which has quite similar terrain and less restrictions. The most valuable nature formations are however in the strict reserve.

Fairly typical tundra-like landscape on your way in the Kevo reserve. The picture is taken somewhere near the treeline as there are some mountain birches around.

Kevo strict nature reserve was established in 1956 to protect the Kevo gorge and the surrounding fell nature. With its 712 km² area it is the largest strict nature reserve in Finland. This area has probably never been permanently inhabited but nomadic Samis have been hunting wild reindeer as indicated by many place names and several ancient trap pits. On top of the Kuivi fell there is an old sacrifice cave.

There are no wild reindeer in Lapland any more, but domesticated ones are abundant. Reindeer husbandry is an important source of income for locals and you may see reindeer anywhere within the nature reserve as well. Notice that permanent residents of Utsjoki municipality, especially when herding the reindeer, have the priviledge to wander around the area much more freely than hikers.

The Kevo gorge is a 40 km long and up to 100 m deep rift valley. It was formed by plate tectonics about 70 million years ago. There are some much smaller rift valleys elsewhere in the Kevo reserve and Paistunturit area.

Most of the area is treeless highland, in general moor or mire. The apple-tree-like mountain birch is the only "tree" on these lands and the juniper has its own weirdly shaped forms. As elsewhere in Utsjoki the pine survives only in the most temperate locations. There are some extremely rare plant species growing in the gorge valley or its vicinity. The gorge is also a remarkable nesting site for some rare birds. Seeing a rough-legged buzzard on your way is more than probable.

The autumnal moth caterpillars caused huge damage to the mountain birch forests in the mid-1960s. An area of more than 1,300 km² became treeless (in Utsjoki, much more in Norway), part of it remaining such ever since. Some dead trunks are still visible on the ground.

The midnight sun is shining from late May to late July. Only the clouds will dim the over two months long polar day. The thermal summer usually begins no earlier than late June, and still, freezing temperatures or even snowing is possible. The trails motly run above the treeline, so there is very little shelter against bad weather and even slight wind may make you feel cold. Lasting snow usually falls in late September.

Just about 5,000 visitors hike the Kevo trails each year, nearly all of them during the peak season in late August and early September, when mosquitoes are mostly gone and the landscape shows all its colours.

Services in the reserve and the wildernes area are limited to the trails, dry toilets (bring your own paper) and campfire sites with firewood, benches etc., and a few open wilderness huts (one of which on the Kevo trail) and turf huts.

Trail into the nature reserve

There are two entry points to the Kevo area. The distance between the entrances is about 130 km by road. If you have a car, you probably need to buy a car transfer service from some local entrepreneur. For coaches the timetables are scarce but both entries are accessible by bus. Check the timetables from Matkahuolto. Trekking from Sulaoja to Ruktajärvi takes about four hours so you should reach the Ruktajärvi hut before night even if you arrive by bus.

There are no entry, camping or hiking fees.

Kevo is a strict nature reserve so the usual right to access does not apply. Hikers must stay on marked trails. Overnight stays are allowed only at the campfire sites. Making a fire is allowed only on dedicated fireplaces and is, of course, forbidden if there is a wildfire warning in effect. The fireplaces are equipped with firewood as you cannot collect any from the surrounding nature. Using a camping stove is always allowed, but be careful.

Dogs are allowed but they must be on a leash all the time.

The route from Sulaoja to Ruktajärvi is in the Paistunturit Wilderness Area where the right to access does apply. The border of the strict nature reserve is marked with green-white signs and red poles. From Kenesjärvi the restricted area begins after a 2-km walk from the parking lot and is similarly marked.

Fording rope at the Kevo river

Before you go, contact Finnish Forest Administration's Customer Service at Siida and ask about the current conditions on the trail.

During the summer season hiking by foot is the only means to get around. The terrain is rough at many places. You should have sturdy footwear. Remember to pack swimming shoes for wading as there are no bridges (some maps show a bridge over Njaggaljohka but it does not exist). At Luopmošjávrrit, Roajasjávri and Bálddotjávrrit there are duckboards over rivulets a few metres wide.

Most of the steepest climbs and descents are equipped with wooden staircases. Duckboards take you over the large mire close to lake Bálddotjávri. These duckboards have been renovated in 2019. At the wading points there are grip wires for help. The deepest ford is the northernmost one near Beahcelávojávrrit.

In winter you need proper cross-country skis, suitable for both loose and hard snow, the former at least in midwinter. There are no marked or maintained winter tracks. During the winter daylight (or more accurately twilight) is limited to a few hours and temperatures as low as −30 °C (−22 °F) are fairly common.

Lush Fiellu valley from above with the river Fiellugahjohka down there. Notice how the Kevo Trail has eroded to the ground. By looking carefully you can see the trail continuing beyond the valley on the far left.

This is very remote area. For safety reasons a printed map is a must.

The whole area is shown in Kevo Paistunturit map (1:50 000) by Calazo and the Utsjoki-Kevo Outdoors map (1:100 000). Both maps cost about €18 but Calazo's is more detailed. You can buy the maps from the web, bookstores, most grocery stores in Northern Lapland, or from the Siida Visitor Centre in Inari village. The maps have explanations in English.

A GPS might be helpful but the signal is usually weak or absent. Mobile phone location is of use in the beginning and end of the trail. Missing the mobile network elsewhere runs the phone out of battery within hours. Just turn it off (or use flight mode) until you need it. Also the GPS of the phone uses a lot of power when enabled.

The nearest grocery stores are in the villages Karigasniemi, Kaamanen and Utsjoki.

Kevo Strict Nature Reserve t-shirts and patches as well as Arctic fox plush toys are for sale at Siida Shop in Inari village.

The nearest restaurants are in Karigasniemi, the Muotkan Ruoktu holiday village, and the villages Kaamanen and Utsjoki.

For cooking on the trail you need to carry not only the food but also your own camping stove, fuel and matches. You can also use campfire sites. There is firewood but you need to chop them first (this is to limit how much firewood people use). Every camping site has waste bins but you are really expected to carry all your waste out. Follow the leave-no-trace principles.

In practice all running waters are potable, but close to the camping sites it might be a good idea to boil it anyways. In summer 2017 there was diarrhea epidemy among the Kevo hikers, probably caused by a carrion somewhere creek upstream.

There are two lapp-pole type shelters inside the Kevo reserve. This one is at Gamajotnsuohppášája. The smaller building in the background is toilet.

Ruktajärvi open wilderness hut is the only hut on the Kevo Trail. There is space for 10 people. Camping is allowed on the yard.

Own tent is a must. Do not attempt to hike here without suitable capability to sleep outdoors. Camping is allowed only on official camping sites, there are 14 of them on the Kevo route and 9 on the Kuivi route. All camping sites have a dry toilet, garbage bin, fireplace, table with benches, some firewood, and pallets to be used under the tent if you wish. No other service, and no personnel. Even though there are garbage bins you are supposed to take your own waste out from the reserve. All camping sites are located next to some kind of water resource. Don't forget to bring your own toilet paper!

The 69.456126.2947 Ruktajärvi open wilderness hut in Paistunturit Wilderness Area is the only hut for hikers on the Kevo trail and, given its location, often rather crowded. On the Kuivi trail there are three more open wilderness huts 69.505726.30538 Njávgoaivi hut, 69.560126.35569 Akukammi hut, and 69.611426.516810 Kuivi hut but never rely that you can use a hut. Camping is allowed in the vicinity of all huts. If the hut becomes crowded the lastcomers have undisputable right to stay.

As in 2019 Kuivi hut has a serious indoor air problem. Finnish Forest Administration keeps the hut open but does not recommend using it.

The lapp pole huts at 69.4981726.52511 Suohppášája and 69.6040526.806612 Gamajotnsuohppášája as well as the 69.526926.621943 Fiellu turf hut are meant to provide shelter in case of bad weather and a warm, dry place for cooking and drying your equipment. They are not intended for staying overnight. You can heat up the stove in these huts even if there is a wildfire warning outside. A turf hut at Tapiola Goahti burned down completely in 2015, and seems to be removed from the maps.

The Finnish Forest Administration has a few more huts inside the reserve for its own technical needs. One of these is erroneously marked to some maps as a lonely toilet(?!) in the southern end of Bajit Njaggalluoppal. It is not a toilet nor accessible to visitors.

Kevo is ranked as a very demanding trail. The terrain gives challenge even for people in good physical condition. Do not go without sufficient experience. Even though the trail is visible on the ground, this is so remote a place that one should carry a printed map and a mechanical compass for safety reasons. Make sure you know how to use them. On the Luomusjärvi esker and nearby lake Balddotjávri there are other trails intersecting the Kevo trail. Make sure you follow the one with orange markers.

Most part of the fell area and the whole gorge are without mobile phone signal. Do not hike alone: in case of emergency you probably can't call for help from where you are.

Do not forget first aid equipment. In a possible emergency situation it will take several hours before you end up in the hospital even if you have signal nearby and will be evacuated with a helicopter.

In case you visit the area in June or July, prepare yourself for a vast number of mosquitoes and blackflies by repellant and suitable clothing.

Tell about your plans before you leave, and give a hard deadline when emergency services should be called unless you have announced your return or told about being belated. Remember again there is no mobile phone network around.

Always put your name on the guestbooks in the huts and also tell there where you are heading next. If you disappear, the guestbooks will provide information to the rescuers. Also write down to the guestbook if there was something wrong in the previous hut or on your way on the route so other hikers can prepare. Don't forget to leave your greetings.